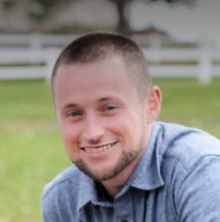 Dr. Wineland was born and raised in Grimes, Iowa, where he attended Dallas Center-Grimes High School. He spent most of his time playing sports, specifically basketball, soccer, and football, before graduating in 2009 as a salutatorian. After high school, Dr. Wineland went on to play soccer and study biology at Morningside College, where he earned a Bachelor of Science degree in biology in 2013. Dr. Wineland then attended dental school at the University of Nebraska Medical Center College of Dentistry in Lincoln, NE, where he earned his Doctor of Dental Surgery in 2018.

Dr. Wineland is passionate about his career and loves playing a role in improving his patient’s quality of life using the skills he’s learned along his journey as a dental health professional. The most rewarding part of his job is seeing people smile at the results of their visits and making connections with families that span generations.

Dr. Wineland and his wife, spend most of their time with their two kids, often watching tennis and soccer. Dr. Wineland and Brianna are happy to come back to Sioux City and enjoy meeting new people while staying active in the community. Even though Dr. Wineland graduated in Nebraska, he stays true to his Iowa roots and cheers on the Hawkeyes.

Thank you! Your submission has been received!
Oops! Something went wrong while submitting the form.